Sylvia Debit and Anniek Vetter met during the master programme ‘sustainable product cultures’ at the Bauhaus-University in Weimar, Germany. After graduating, they were able to continue developing the P-bank,in close collaboration with the faculty of Professor Jörg Londong who is specialised in Sustainable Water-management.

The project received an iF Universal Design – Expert Favorite and was invited to the TFF Global Summit in 2015. In 2016/17 the team was selected for the Neudeli incubator program and sponsored by the B100 Bauhaus anniversary fund.This year the P-Bank received funding from the German Federal Environmental Foundation (DBU).The first P-bank was build and tested for six months during the 100th anniversary of Bauhaus this year in Weimar. 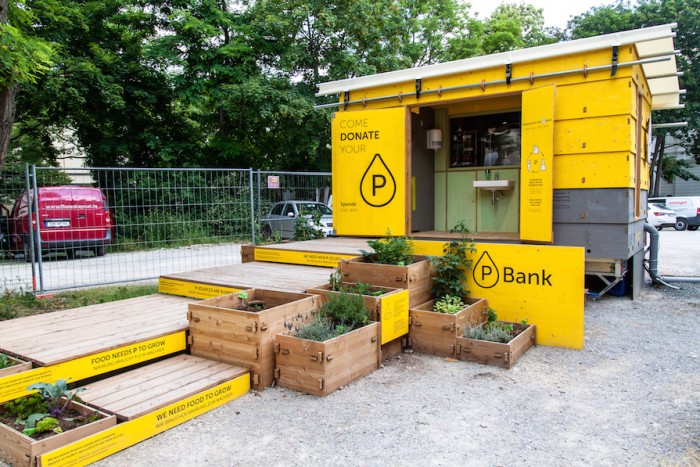 P Bank is a project by team members, Sylvia Debit and Anniek Vetter, who are both graduates of Bauhaus University, Weimar. At the centre of their project is the chemical element, phosphorus, which is currently endangered due to high consumption levels.

This information inspired the duo to create P bank, a public toilet facility which aims to challenge the phosphorus cycle. With this, they are able to use the urine to grow plants as this has become a substitute for fertilizer.

The facility allows visitors to make a P donation. While donating, one learns about the upcoming phosphorus scarcity and as a result, be part of the solution.“With each visit, you spend about 300 ml of urine. This contains about 200 mg Phosphor. That’s enough to grow 4 carrots.”

In 2016 and 2017 the P bank team was selected for the Neudeli incubator programme and was sponsored by the B100 Bauhaus anniversary fund. This year it received funding from the German Federal Environmental Foundation (DBU).