Sneha Suresh recently graduated from Srishti Institute of Art, Design and Technology, Bangalore, India with a degree in Visual Communication and Strategic Branding. While in Gulbarga, India, Sneha came to the understanding that material culture and oral histories give us an insight into the past and are worth preserving. The narratives associated with artefacts the notion of the hand-made are frozen in time and deserve to be valued and preserved as much as the artefact. Sneha has studied the ancient artefact of Gulbarga to get an essence of the town’s culture. Its people and its past.

The aesthetic and utility value, imperfect contours, and unanswered questions associated with these artefacts that are a part of Gulbarga based artist and collector Mr. Vijay Hagargundgi’s collections triggered her imagination. She found she needed to express their beauty and give their narratives a tangible form. Sneha chose the technique of lino printing to express her idea. Carved blocks have been used to print and become artefacts that tell a story of their own. 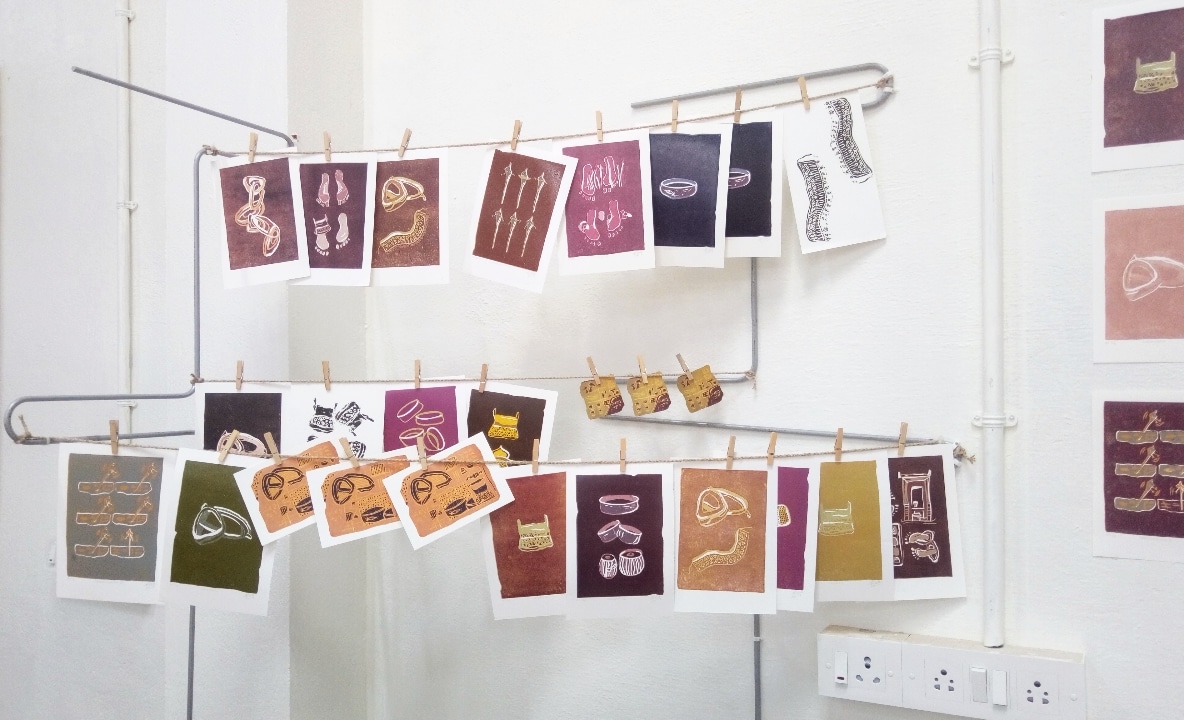 Prajne: A Tribute to Ancient Artefacts and the Hand-made
During a recce trip to Gulbarga (Karnataka, India) while in my final semester in design school and a
visit to the collector and artist Mr. Vijay Hagargundgi’s house is primarily what inspired me to work
with artefacts. Most of his collections were artefacts from Northern Karnataka and some of them
even dated back to the 6th century BCE.

Since Visual communications transcends the limitations of text, the intent of my thesis project ‘Prajne’ which means ‘consciousness’ in Kannada is to preserve and pay tribute to forgoPen artefacts and the hand-made while celebrating the old and giving certain ancient artefacts and the narratives associated with them a new life through visuals. As a visual communica?on designer and visual artist interested in print-making I wish to push people to think, imagine and look at ancient artefacts through a different lens. In order to give these narratives a tangible form while paying tribute to the hand-made I chose to work with linoprin ?ng as a technique since the blocks that are carved and used to print themselves become
artefacts with a story of their own. The narratives associated with these artefacts are frozen in tme and deserve to be preserved as
much as the object and the notion of the hand-made itself. If these artefacts are placed at a museum there are chances of people just walking past them without appreciating them for all that they are.

The purpose of my project is to give these artefacts and their narratives a new life through visuals while preserving and celebrating the old. I felt that this project had the potential to make people more “aware” of everyday artefacts of the past and could also possibly make them more mindful when they visit a museum next.

Target Audience
The possible target audience could be young adults who are interested in ancient artefacts, history, cultures and discerning individuals interested in looking at artefacts differently or collectors of artists’ books and prints. This framework of giving the narra?ves associated with artefacts a tangible form could also possibly encourage more collectors of artefacts to open up their
collec?ons to visual artists and communica?on designers in order to be able to share the story of these ancient artefacts with a larger audience.

Lino Printing
Linoprinting involves transferring your illustrations onto lino blocks, carving the blocks and then using them to print. The artefacts and narra?ves are frozen in ?me I felt that the effect of a lino print depicts just that. To me, carved blocks and lino prints look like ancient stone tablets and other inscriptions that were used as ancient means of communication. The leZ over blocks were as much a part of my output as the prints were since the blocks become artefacts that tell a story of their own. Lino printing is something I am very passionate about. It is therapeutic. One has to be very mindful while carving the block. I use to hurt fingers a lot when I first started lino printing. Developing a print in this case is an extremely slow process that teaches you patience, it helps develop a steady hand and is very very satisfying at the end. In addi?on to the simplicity and the aesthetic of the prints that you get at the end the process means a lot to me.