Gary Zhexi Zhang is an artist and writer interested in socio-technical objects. His current work explores decentralised organisations such as swarms, mycelia and markets within the context of aesthetics, cryptography and work. He works with film, installation and software. As a writer, Zhang is a regular contributor to Frieze and Elephant magazines, and has also published in FOAM, Fireflies and King’s Review.

He was recently awarded the MIT Journal of Design and Science essay prize. Recent projects and exhibitions include Net Work and the Decentralized Web Summit at the Internet Archive, Cross-feed at Glasgow International 2018, vdrome.org (online) and ALL CHANNELS OPEN at Wysing Arts Centre, Cambridgeshire (2017). Since 2015 he has held residencies at PRAKSIS, SPACE Art & Technology, London; Oslo; Collusion AI Lab, Centre for the Future of Intelligence; BALTIC, Gateshead; CCA, Glasgow and Wysing Arts Centre, Bourn. He is also a curatorial advisor for Science Gallery London’s Dark Matter season (2019). 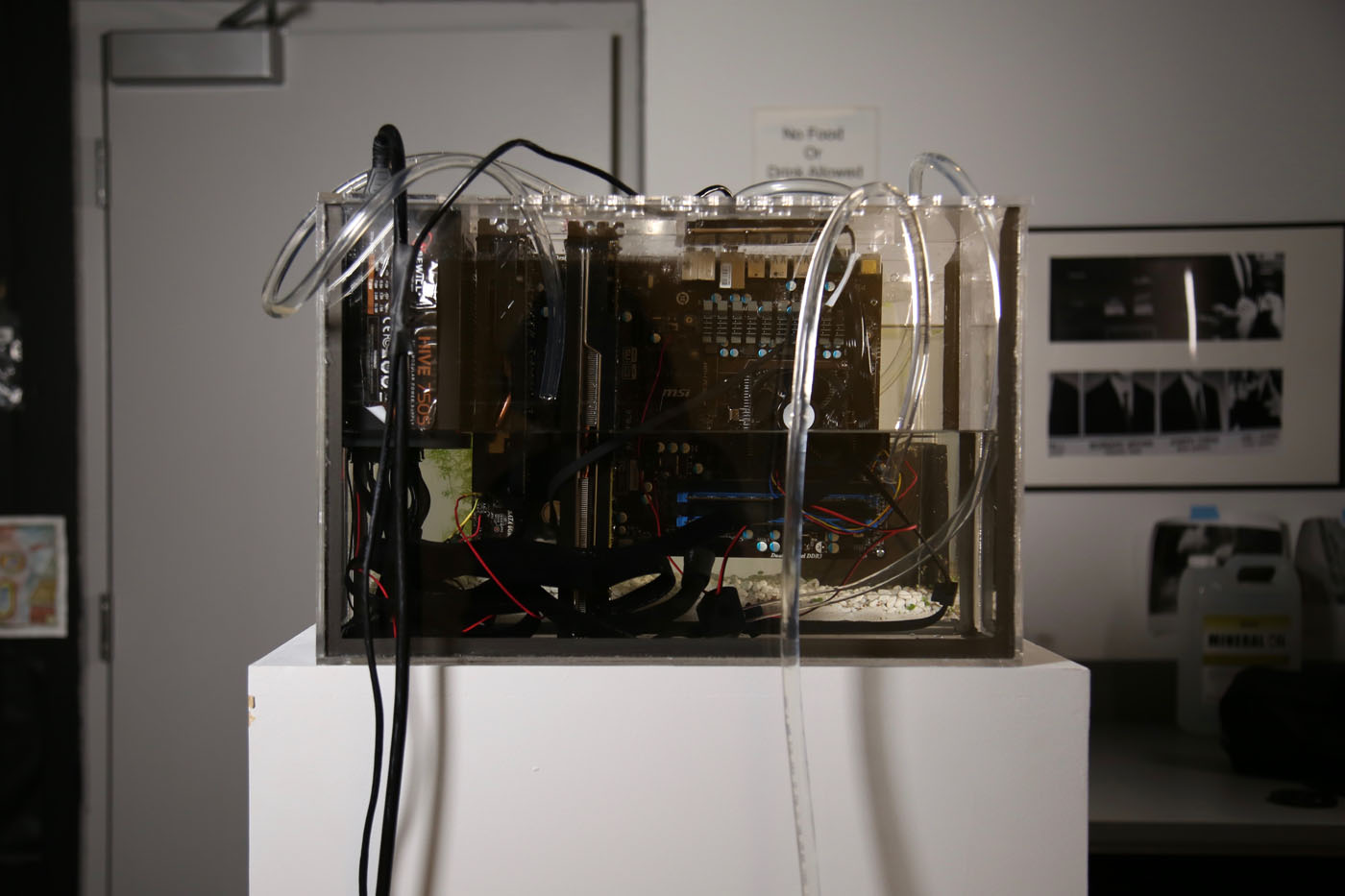 Farm is an ongoing speculative design project which explores the materiality of socio-ecological relationships within the networked world through energy, work and labour. For Dutch Design Week I propose to develop a further iteration of the project, which has so far been through two versions, Farm I (parasitic shrimp farm), and Farm II (sacculina).

The project is initially inspired by the “proof-of-work” mechanism that underlies blockchain, whereby the information on the network is cryptographically secured by participants who perform an arbitrary and intensive amount of computational “work”. Because it is physically implausible and economically unprofitable for a “bad” participant to defraud the network by expending more energy that all the other users combined, the network is secured by consensus. In this sense, blockchain has been hyped as “trustless” system. As is now well-known, through this “useless” expenditure of energy, bitcoin’s energy bill is growing to environmentally disastrous proportions at a global scale.

Relationships take work. Farm explores the link between heat and trust by evincing the energy needed to power a social contract. Blockchain effectively “outsources” this work to computational labour, proposing to decentralize the work traditionally performed by centralized social institutions, such as the administrative work of banks and governments, or indeed the physical work represented by fortifications and bank vaults. Farmis an anthropological and ecological investigation that asks: how much energy does it take to maintain a society? From intermarriage to gift economies to international trade, the bonds by which society is formed at every scale have always been forged through the expenditure and exchange of labour, producing relationships of cooperation, dependency as well as exploitation. As information networks bring about new forms of communication, identity and social organization, our social infrastructure looks increasingly immaterial, and yet the cryptographic protocols that structure the digital society nonetheless find their underpinnings in energetic labour. Farm seeks to investigate this relationship by making it palpable.

Farm I (parasitic shrimp farm) replicated this relationship within an ecological system. The work consisted of two tanks, one of which housed a computer mining Bitcoin, running while fully submerged under mineral oil. The other tank housed a colony of tropical shrimp and algae. As the computer hashed Bitcoin’s proof-of-work algorithm, the intense energetic expenditure heated the oil, which pumped through tubes and cooled in the water of the shrimp tank. In turn, the hot oil heated the water to the tropical climate needed by the shrimp, which were sustained by eating the replenishing supply of algae. The aquatic ecology flourished parasitically on the waste energy of the bitcoin miner. Inspired by deep-sea computer servers, with this project I was particularly interested in future ecologies of the anthropocene, as the technologies that underpin human society become increasingly integrated within “natural” ecologies and landscapes.

Farm II (sacculina) replaced the shrimp in the first system with people. Similarly, a computer submerged in an oil tank intensively mined cryptocurrency using proof-of-work. Installed in a gallery space, the hot oil is pumped through 200ft of vinyl tubing, snaking across the walls and ceiling of the gallery. As viewers enter the room, they feel the elevated temperature of the room as the radiating oil circulates throughout the architecture. For Dutch Design Week, I propose to present the Farm project and its underlying research as a whole, and to develop a further iteration of its installation in Eindhoven.